As a student at Jacob Kramer College of Art in Leeds, we had a most intimidating life drawing tutor in Laimonis Mierins. Cutting an intimidating figure dressed in black with silver hair, Lem would scare, bully, cajole and coax his students to be brave. If we didn’t take drawing seriously, he’d threaten us all with a tommy gun that was left over booty from the Second World War. Yes, he really did.

He started us off using pencil; soft and forgiving, then charcoal; sooty and pliable, but graduated—slowly, mind—to using the most unforgiving of media: pen.  One of the toughest mediums to draw with, ink is the ultimate in mark-making; no room for error, but what errors you make have to be incorporated and believable.

In this era of Instagram gratification, I still like the discipline of looking hard, committing and interpreting life into line. This drawing of the train station in Porto took a bit of time, gave me a few scares but rewarded my fragile patience, every detail burnt into the memory.

I worked with one of our designers at Turn Key, Brian, to add another dimension to the drawing by adding colour digitally. I gave him free reign to interpret the drawing how he saw fit. There’s two versions here, one without the lifework and one with it. I love each equally, the abstract one works for me as the artist who drew it, the lifework inserted in my imagination. The line and colour version works best for people who’ve not seen the original I think.

The image was submitted to an exhibition of other designer works to celebrate 30 years of Thompson Brand Partners. I was particularly pleased how the drawing skills I learnt all those years ago could still deliver in an engaging and contemporary way.

Lem would be proud I think.

The Tower of London is one of those places that everyone’s been to as a kid. So when we had a request from our weekend guests Paul and Carol to go there, I couldn’t resist it!

The Tower is still officially the headquarters of the Royal Armouries (with the full collection up in Leeds of course) and is chock full of impressive arms and armour, including this exquisite detailing on Henry VIII’s quite voluminous suit.

Breastplates a go-go. Must have been quite uncomfortable and chafed somewhat.

This medieval stained glass is reported to be the last thing Henry VI saw before he was murdered.

Beautiful detailing belies the true nature of the job its required to do. 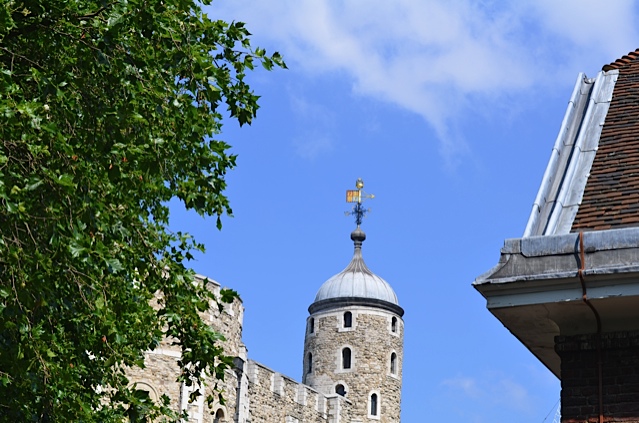 Solid gold crowns sit atop William the Conqueror’s impressive white tower, built just after the Battle of Hastings, a proto power play if ever there was one.

Up until relatively recently, the royal mint was based in the Tower of London harking back to times when the monarchy needed hard currency to fight wars and keep the peasants under control (a bit like these days).

Nice art commissions dot the site too with the famous menagerie of animals that were kept there represented as chicken wires sculptures. 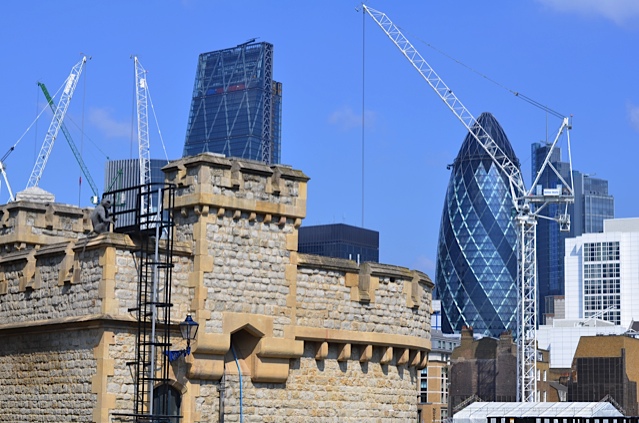 If you didn’t believe me about Henry VI, here’s the proof…kind of.

Loving the detailing and craftsmanship on another of Henry VIII’s suits. 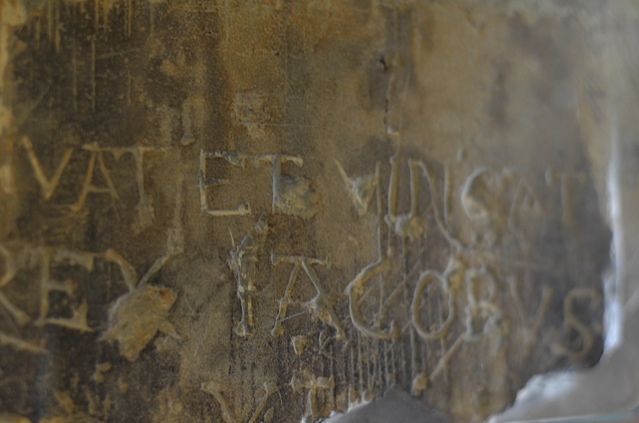 In many of the towers there is ancient graffiti left by prisoners awaiting their fate in either the torture chamber or the executioner’s block. 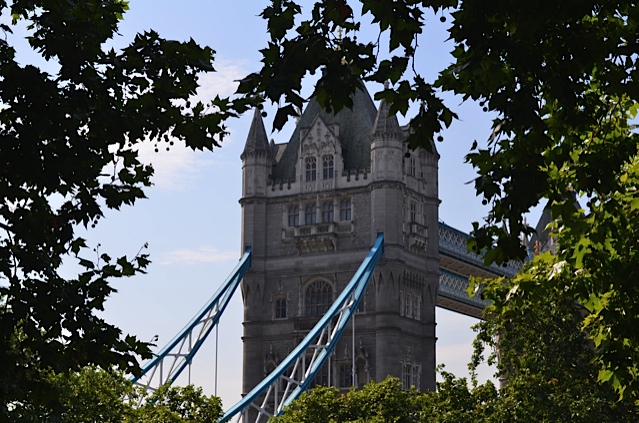 Named after the Tower or actually its towers, mmm. Not sure, any ideas? 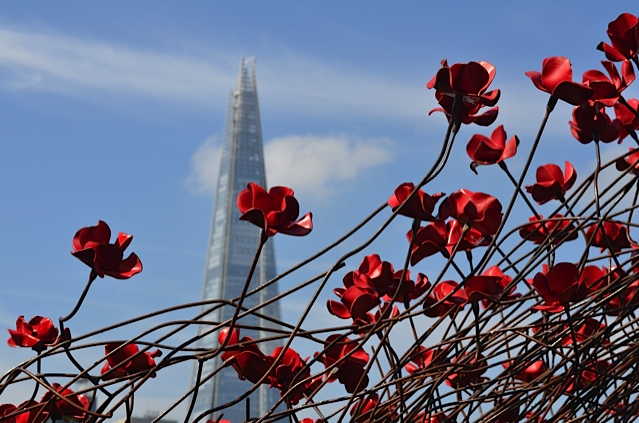 Blood and the shard. There’s something poignantly beautiful happening at The Tower of London…

The evolving installation by ceramic artist Paul Cummins, with setting by stage designer Tom Piper, will be unveiled on 5 August 2014; one hundred years since the first full day of Britain’s involvement in the First World War.

Entitled ‘Blood Swept Lands and Seas of Red’, the installation is being created in the Tower’s famous dry moat. It will continue to grow throughout the summer until the moat is filled with 888,246 ceramic poppies, each poppy representing a British or Colonial military fatality during the war.

The poppies will encircle the Tower, creating not only a spectacular display, but also an inspiring setting for learning activities, as well as providing a location for personal reflection. The scale of the installation reflects the magnitude of such an important centenary, creating a powerful visual commemoration.

The last poppy will symbolically be planted on 11 November 2014 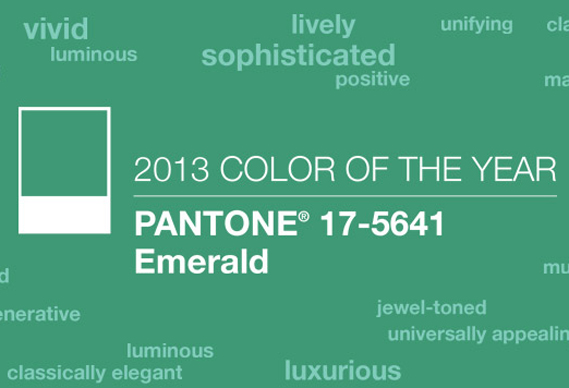 Pantone do this every year. They pick the most bizarre colour in their vast array of shades to be the upcoming colour of next year. They predict it will dominate the catwalk and be the go-to colour for designers and fashionistas. Except last year’s colour (Tangerine in case you’d forgot) wasn’t exactly the must-have Pantone swatch colour of 2012.

I expect this is more about a hook for the PR company to get the Pantone story out there. After all, I’m writing about it and it’s the kind of story journalists like.

Don’t get me wrong, it’s not like I don’t like Emerald but the descriptors that surround the colour above have the accompanying sounds of barrels being scraped. I mean, luminous and universally appealing? Not in Hull it’s not where green is an unlucky colour with the seafaring city. Good job I don’t live in Hull…

Like everyone, I’ve been caught up in the whirl of the most amazing Olympic Games I have seen in my lifetime. There are many, many things that have caught my imagination from the imaginative application of the controversial branding to the outstanding performances from Team GB, in particular the Yorkshire contingent.

I definitely feel like I should have tried harder to get down and see it in the flesh but the BBC coverage was so good, I genuinely felt like I was there without the hassle of trying to get home at midnight to an over priced hotel room in the wrong part of town.

I’ve written before about stamps and I have to say The Royal Mail‘s decision to produce a stamp for each gold medal winner was inspired. To top it all the gold post boxes were a touch of PR genius. The stamps themselves aren’t the best design job in the world – perhaps they were a bit of rush job – but the idea is lovely and what better way to get people talking about stamps and postage again after a tough period for the postage business.

Here’s a few of them, starting with my favourite gold medal win of them all, Leeds’ Nicola Adams first ever women’s boxing gold. 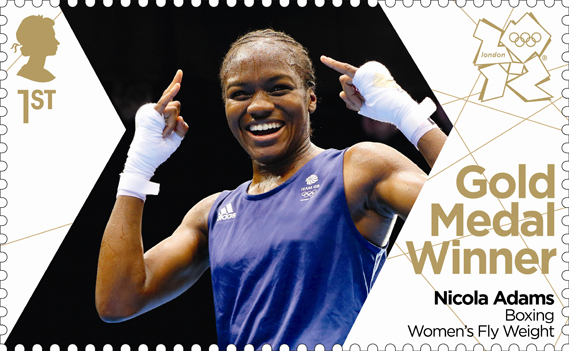 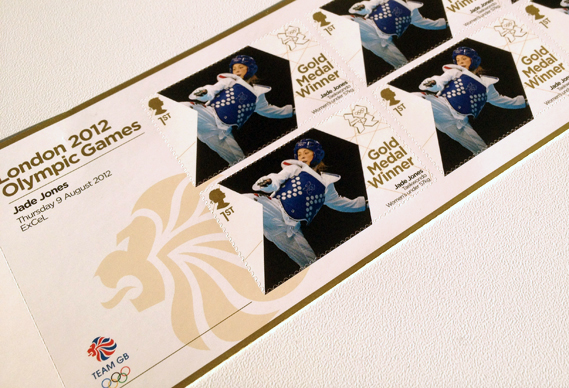 As part of our local Festival I love West Leeds there was the opportunity to have a stuffed animal living with you in your home for a week. There was something about this idea that I liked and I when I saw the list of animals on offer, I really fancied the barn owl. So I applied to the Get Stuffed project and a couple of weeks later a barn owl was delivered to our house.

The lovely wife and difficult daughter were quite frankly weirded out by the whole thing and looked at me like I was deranged as I set him up in the conservatory, cruelly allowing him a view of the trees without actually screeching in them. He (we think he’s a he but not sure) is a magnificent specimen set in a beautiful pose showing off the size of his wings and his comparatively small body. I christened him Leodis – the old roman name for Leeds, a city that features owls prominently on its coat of arms.

I was determined to integrate him into my life and planned a few visits during the week that would create a nice story to tell as part of the project. There is an exhibition planned at the beginning of the festival in July – worth keeping an eye out for. In the meantime, here’s a few sneak peeks of what Leodis got up to during his stay…

I liked this cheeky celebration of the Queen’s Diamond Jubilee and Pantone‘s 60 years of helping designers and printers get the colours right every time. It was produced by ad agency Leo Burnett in London – I must say I would have liked to get my hands on a swatch.

Wonder if the actual colour of the frock Her Majesty wore on the day is in there?

There was an error retrieving images from Instagram. An attempt will be remade in a few minutes.