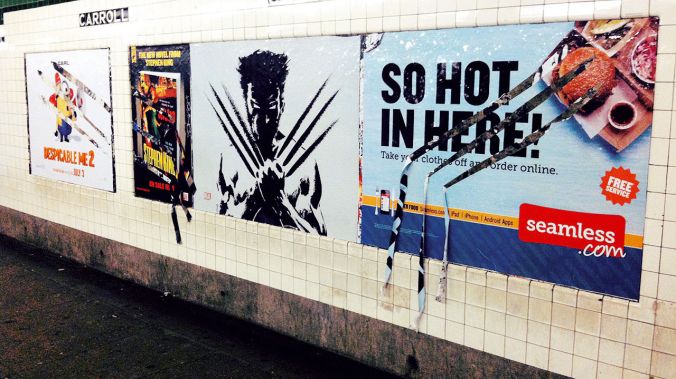 I’m a huge fan of movie posters and have wittered on endlessly on this blog to anyone who has enough patience to read about my love for them. There are some great and some not so great examples around at the moment and one of the best examples of brilliant creativity in this space  had nothing to do with the actual marketing team, but a street artist.

The dude who goes by the name Poster Boy NYC is known for ‘putting his spin’ on NYC  signage with anti-consumerism, anti-everything satire. What he’s done for a poster of  Hugh Jackman’s latest movie, The Wolverine, however, is a genius work of marketing that should embarrass the studio team assigned to this film for not thinking of it first. The actual poster for the film features the simple image of Wolverine with claws bared. In the his version, however, the posters on either side are made to look as though they have been clawed by Marvel’s hirsute superhero.

It’s a piece of sharp thinking, sure to get the official creative team looking at their shoes and coughing. Sign him up, boys.