The Garden of Evening Mists by Tan Twan Eng

An unusual choice for the boys book club this month. Put forward by Andrew in an almost hopeful fashion, we were drawn to it as it was outside our usual orbit of choice and as is often the way with books like this, we select it in spite of it almost.

There is so much to like about this book, it’s really difficult to know where to start. The opening sentence of the book sets the tone for what is a moving and poetic story: “On a mountain above the clouds once lived a man who had been the gardener of the Emperor of Japan”

The book tells the story of Teoh Yun Ling, a straits Chinese woman born in Malaya in 1923 and how her life was affected by the Japanese occupation of Malay (as it was then) in the Second World War. Interned in a concentration camp with hers sister, the brutality they face at the hands of the Japanese casts a very long shadow on the rest of her life. After her escape from the complete annihilation of the camp and its inmates, including her sister, a promise she makes dictates the path she takes in later life.

The story itself is being told as the narrator, losing her own memory through degenerative illness, looks back on her life and the author skips lightly from present to past tense skilfully, blending the narrative into a compelling and profound story.

As a means of escape from the brutality, the sisters dream of the Japanese gardens they saw pre war and the pledge Teoh Yun Ling makes to her sister to build a garden for her drives her to seek out the most famed and regarded gardener in Japan, Aritomo. He refuses to build her garden but offers to teach her and their relationship unfolds from there.

The author carefully weaves themes of memory, remembrance, retribution, honour and duty into a rich and compelling story. The big themes are played out in beautiful vignettes – families destroyed by war, on both sides, and the post war ‘Emergency’ in Malay of communist uprising provides a unique insight into an overlooked post war event.

The zen-like calm in which the author portrays Aritomo and his disciplined, rigorous life is exquisitely drawn and his growing relationship with the narrator is elegant and touching. On top of being a kick ass gardener it turns out Aritomo is a top notch archer, calligrapher, engraver and tattoo master.

This is a haunting and atmospheric story, packed full of ravishing detail but its key theme is summed up with the quote that appears on page 118:

“The palest ink will outlast the memory of men”

This quote is close to my heart and resonates with me. I have to say when I came across it, I was blindsided. It is an inscription in a note book that my old boss and late mentor Dean Brewer gave to me many years ago. I harangued him for keeping a beautiful handmade book that he’d bought from a craft fair tucked away in his desk drawer. He shrugged his shoulders and then one day there was a brown paper wrapped parcel on my desk. When I opened it, inside was the little handmade notebook. When I opened the cover, there was an inscription.

Here’s what it said: 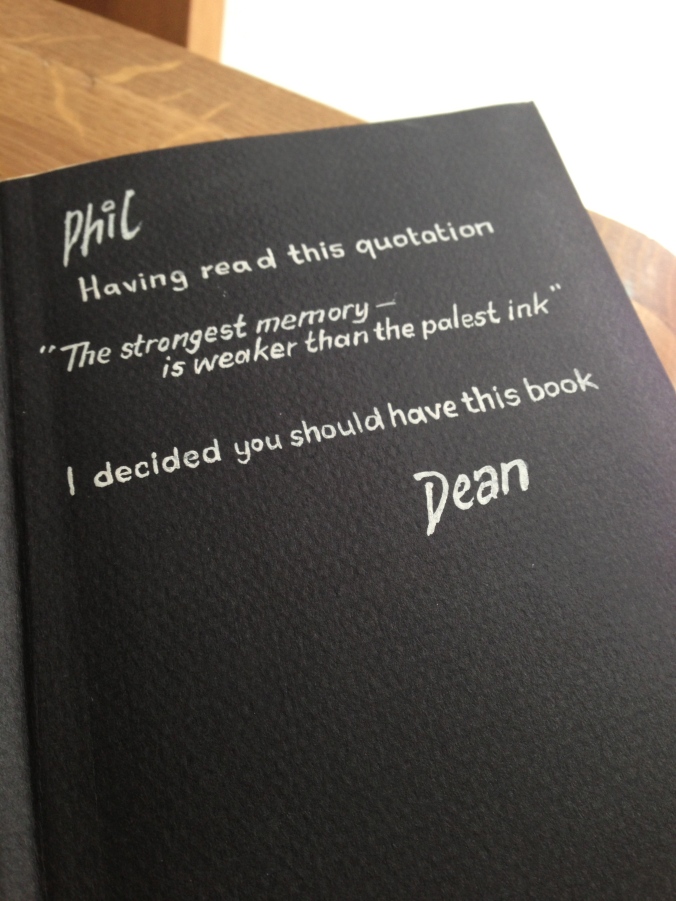 So The Garden of Evening Mists struck a real chord with me.

Making marks to remember people and events is what my little book is all about and this book captures the essence of this beautifully.