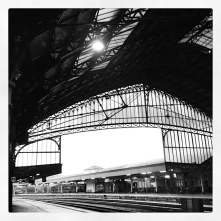 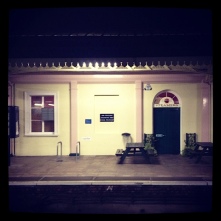 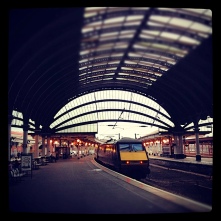 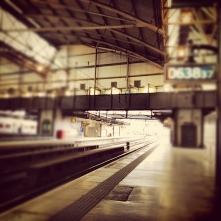 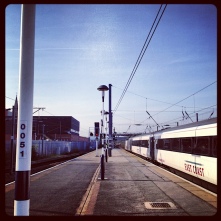 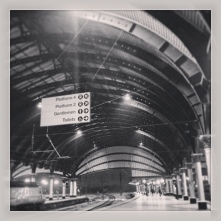 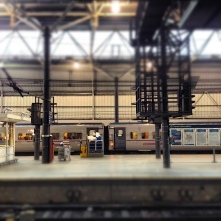 I’ve been travelling a lot over the last 12 months – trains, planes and automobiles at times, is my life. But I use trains as my preferred mode of transport because a) by and large they are reliable and b) I can get work done whilst travelling. I do have the privilege of travelling first class where possible – which isn’t cheap – and this does make a huge difference to be honest in terms of the quality of experience. Perhaps I may not be as enthusiastic crammed into an oversubscribed standard class carriage, standing all the way from Kings Cross to Peterborough on the East Coast main line.

Some journeys are clearly never going to work by rail because our superb rail network in the UK was essentially dismantled in the sixties off the back of the Beeching report, still controversial over 40 years later. But some journey are simply better and almost essential by rail. It’s on these journeys that the traveller gets to see a lot of train stations.

There are the majestic main line stations, built in a time of growth and railway pomp, standing testament to the ambition of a brave new world of railway travel. And there are the local branch line stations, tucked away in half forgotten towns where the station is a lifeline to another world. Over time, I’ve become a bit of a connoisseur of railway stations, not in a train spotter way, but in an observational, slice of life kind of way. I love how the stations are essential, transitory hubs yet at the same time they have personalities of their own.

London stations are all about status – the astonishing St Pancras, recently refurbished and home to the Eurostar has to be the king of the hill. It’s breathtaking sweep and grandeur providing an emotional backdrop to trans European travel. Paddington and Euston are functional and unituitively bewildering. The almost finished Kings Cross has the potential to rival its next door neighbour St Pancras in terms of ambition and style. Of course Kings Cross has the direct line to Yorkshire too which has to give it the upper hand.

Regional mainline stations are largely modern, horrid affairs. Leeds (cobbled together), Manchester (sprawling, confused), Birmingham (entirely underground), Edinburgh (cramped) and Bristol (commuter torture) are just the tip of the depressing railway station iceberg. Notable exceptions such as Newcastle, which still retains its Victorian elegance and York where trains sweep in like the Flying Scotsman. It is a joy when the true romance of the golden age of rail travel is evoked – and it’s lovely that some of stations can still deliver this.

Local town and village stations have a functional quality all of their own. Some are recently built bus shelter affairs, perfunctory and workmanlike, a very specific and narrowly defined job to do. These are barren, soulless and often non-manned operations. Others are thriving hubs offering a warm welcome to weary travellers with time to kill waiting for a connection. This variety are often stations built in the golden age, home to great pubs serving real ales and essential components of the town itself.

But here is beauty in the isolation of a desolate platform in the West Country at 5am on a winter’s morning. And a reassurance that there will be a train that will deliver me to Birmingham New Street and then in turn, on to Leeds – my final destination.