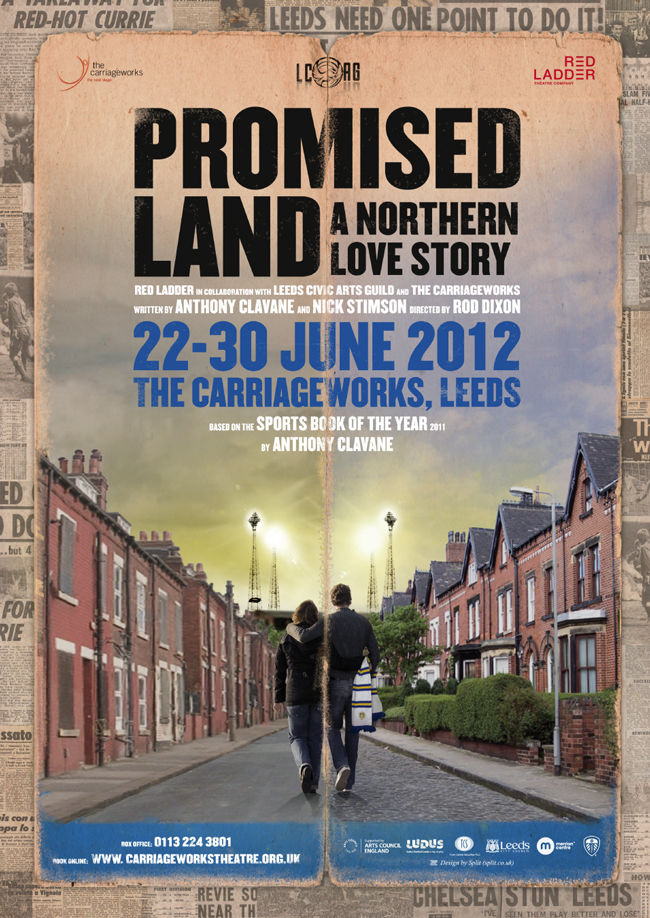 The Promised land is a fantastic book by Anthony Clavane plotting the rise and fall of his beloved hometown team Leeds United set against the backdrop of the rise and rise of on of the powerhouse cities of the industrial revolution, Leeds. Clavane is also Jewish and the way he weaves the history of Leeds’ Jewish population (once the largest outside of London) into the rich history of the city and its love hate relationship with its football team.

I was fascinated then to see how it would be translated on to a the stage. Billed as a Northern Love Story, the documentary style of the book had to be fundamentally translated into a narrative that could be told in a theatre and I have to say I thought it was a huge success. The production was by local amateur company Red Ladder and full credit to the company: this was a production of professional standards from the staging, design, direction and acting.

It was a touching, thrilling and at times uncomfortable experience as the starstruck lovers at the centre of the story played out their awkward North Leeds Jewish and South Leeds Beeston relationship against a backdrop of racism, hooliganism and dead-end opportunity of Leeds in 1975. The book told the fascinating story of immigrant jews in Leeds and how they came to dominate the city’s sporting clubs, first with Rugby League and latterly Football – this was very well handled in the stage production using the descendants of the central couple to tell this revealing story.

The title of the post by the way came from the programme notes for the production written by Anthony Clavan and I really quite liked it. He talks a lot about the “Leeds Attitude” that permeates the city – we’re used to being hated (particularly in the context of LUFC) and as such we’ve developed our own coping mechanism, a kind of ‘us against the world’ approach. This phrase kind of summed up my own personal love hate relationship with the city which over the years has provided me personally with a wealth of opportunities (and I am blessed) but also can frustratingly hold us back with a lack of vision and old-fashioned parochialism.

But having said that I still live here and I like to think that in doing so, I’m playing my own small part in The Promised Land.