Recently I learnt of the sad death of one of my true inspirations, Laimonis Mierins.

Known affectionately to everyone as Lem, he taught drawing at Jacob Kramer College in Leeds (which is now Leeds College of Art). Lem was a native Latvian who had settled in West Yorkshire during the second world war and he seemed sophisticated and mysterious to this green 16 year old.

So it was with great trepidation that I approached my first life drawing class with Lem. I can remember the over heated studio like it was yesterday and the sheer feeling of terror picking up a piece of charcoal to draw a nude woman still gives me the shakes.

But Lem cajoled, bullied, encouraged, laughed, took the piss – in short did everything to get us looking, seeing, drawing properly.

We soon moved on to drawing with a pen on paper, no pencil, no sketching. ‘Just make your mark!’ he would insist, just before bring out his Tommy Gun from his little office (literally a real gun, by the way, but without bullets obviously).

‘Bloddy Hell, people!!’ was his catchphrase and his heavy Latvian accent lent an air of fear and mystery to what were already dramatic classes. But his style was inspirational and soon we were all looking forward to drawing classes and we spread our wings wider and started drawing everything we saw both inside and outside the college.

Lem encouraged us to truly study what we drew and didn’t mind if every single detail was accurate – ‘I bloddy believe it…I don’t care!!’ There was a handful of us who loved drawing and continue looking and making marks, drawing what we see. And that’s all because of Lem.

I think I became a good designer because of Lem. He taught me to really look and consider things carefully – traits which set me in good stead as designer. I’ve lost count of the number of designers whose careers and lived have been touched by Lem – he was just one of those people you meet in life who make an indelible impression.

He was completely unique and the world has lost one of its true characters. RIP Lem, you will be missed. 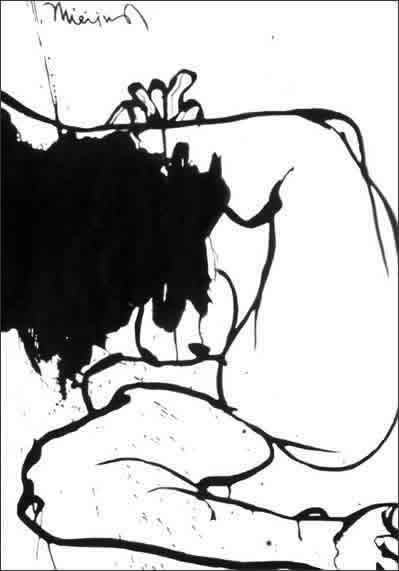 One thought on “A tribute to Lem”